What makes a little girl of principle, become a lurking shadow in the night? 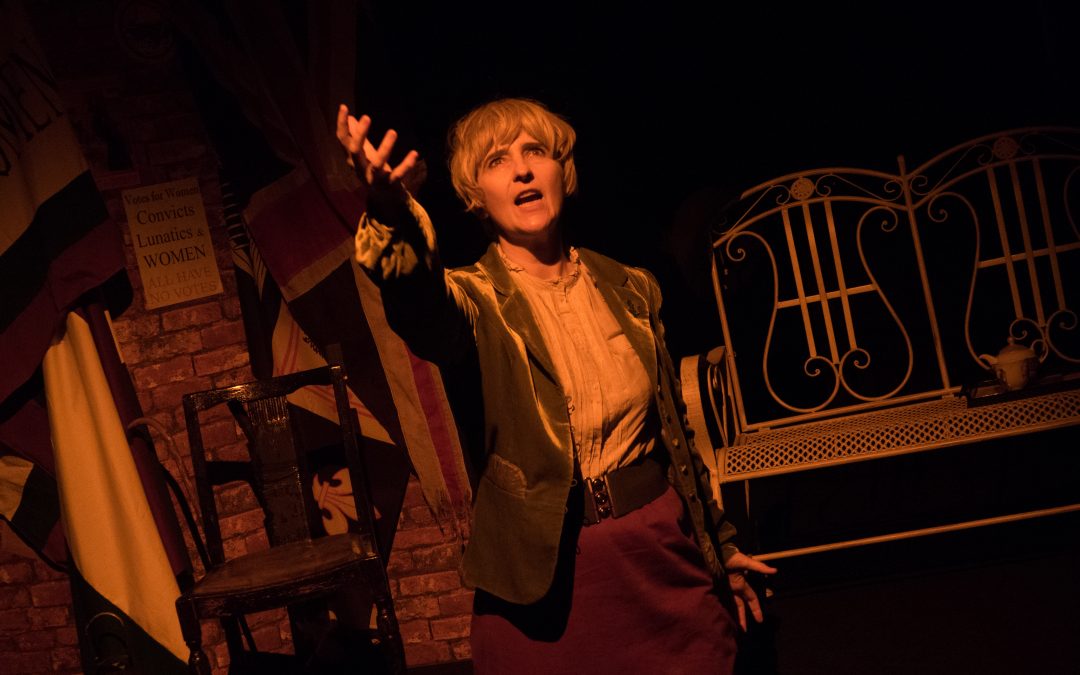 So many women fought for our right to vote. Yet statues and tributes to these formidable women are too few and far between. 2018 – 100 years since SOME women won the vote for the first time (women over the age of 30 who met a property qualification.) This meant suffragettes’ achievements and women’s suffrage came swimming into public focus.

Certain Curtain Theatre seeks to tell some of the history of the suffrage movement through the eyes and life of our very own Preston Suffragette, Mrs Edith Rigby. Exploring Edith’s life has been a fascinating journey. From an early age, she saw the inequalities of rich and poor, of boys and girls. She tried to make a difference. Her story remains largely unsung. But her journey from a girl who wanted equality through peaceful suffragist to militant is a fascinating one.

Best known for burning down Lord Leverhulme’s hunting cottage in Rivington – Edith was a woman of ‘firsts.’ She was the first woman, in Preston, to ride a bicycle – in bloomers! – Much to the horror of onlookers – even her vicar – who feared for her very soul. She founded Preston’s first branch of ‘The Women’s Social and Political Union’ and a branch of The Women’s Institute. One of the first members of the Independent Labour Party (from which she was later expelled!)

She became friends with ‘notorious’ Suffragette, Christabel Pankhurst and joined the ‘suffrage movement’. Her exploits became the stuff of legend. Jailed, at least six times, for ‘terrorist attacks’. Her litany of crimes, is almost beyond belief; vandalising Lord Derby’s statue with tar, bombing the Liverpool Cotton Exchange, burning down a wealthy man’s hunting lodge – even the storming of Parliament itself! – And much, much more! This outrageous, extraordinary woman’s life led to her being shunned by neighbours but her fiery spirit was not easily dampened. Her story and the wider women’s suffrage struggle is one worth sharing. I hope audiences agree that theatre is an excellent way to do this.

Premiered at The Edinburgh Festival Fringe August 2017 with a great response and a 4 Star review from The Scotsman. We aim to take audiences back in time to experience one suffragette’s fiery journey fighting for women’s right to vote. To open a window into the past and hopefully reminding audiences of or indeed introducing audiences to the tenacity of our foremothers.

Ruthless terrorist or impassioned freedom fighter? Check the website for dates near you and you decide. http://www.cctheatre.co.uk/edith-rigby/

I hope WOMAN ON FIRE will light a fire in all who watch to fight for what they believe in.

We use cookies on our website to give you the most relevant experience by remembering your preferences and repeat visits. By clicking “Accept All”, you consent to the use of ALL the cookies. However, you may visit "Cookie Settings" to provide a controlled consent.
Cookie SettingsAccept All
Manage consent

This website uses cookies to improve your experience while you navigate through the website. Out of these, the cookies that are categorized as necessary are stored on your browser as they are essential for the working of basic functionalities of the website. We also use third-party cookies that help us analyze and understand how you use this website. These cookies will be stored in your browser only with your consent. You also have the option to opt-out of these cookies. But opting out of some of these cookies may affect your browsing experience.
Necessary Always Enabled
Necessary cookies are absolutely essential for the website to function properly. These cookies ensure basic functionalities and security features of the website, anonymously.
Functional
Functional cookies help to perform certain functionalities like sharing the content of the website on social media platforms, collect feedbacks, and other third-party features.
Performance
Performance cookies are used to understand and analyze the key performance indexes of the website which helps in delivering a better user experience for the visitors.
Analytics
Analytical cookies are used to understand how visitors interact with the website. These cookies help provide information on metrics the number of visitors, bounce rate, traffic source, etc.
Advertisement
Advertisement cookies are used to provide visitors with relevant ads and marketing campaigns. These cookies track visitors across websites and collect information to provide customized ads.
Others
Other uncategorized cookies are those that are being analyzed and have not been classified into a category as yet.
SAVE & ACCEPT